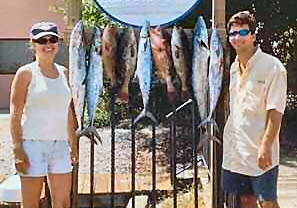 Julie Magardino bought her husband, Tom, a fishing trip with Capt. Bubby Hail to celebrate their 10th wedding anniversary. Tom grew up fishing in New York, and Julie grew up fishing in Ft. Myers. This was a match made on the water. The day started with a major fog. Capt. Bubby went to a favorite bait location to net some shiners. Capt. Bubby sped off as the fog lifted to a secret spot about 10 miles away. The duo hooked up king after king up to 15 pounds. Julie felt there was a king hook-up on almost every cast. Julie caught most of the fish that day. Julie told me that this was her best fishing trip ever. Happy Anniversary! 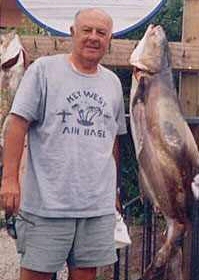 Galeana catches cobia: Naples Sun Times
Neapolitan golf buddies H.A. Street, Ken Westlund and Jeff Zanger needed a fourth angler to go fishing with their favorite guide, Capt. Bubby Hail of Florida’s Finest Fishing.Capt. Bubby brought the gang to a wreck about 10 miles out. The anglers hooked up five goliath grouper. The captain had to move to another spot because the goliaths were interfering with the action. A little while later, Frank hooked into a big one. Frank didn’t give up and boated a big 82-pound cobia in 30 minutes.

By Capt. Barry Berger: Naples Sun Times
Capt. Bubby Hail of Florida’s Finest Fishing, located at the Cedar Bay Marina, fished with Will and Dottie Olson and friends Greg and Linda Urech from Somonauk, Ill. Capt. Bubby brought the foursome to a favorite location just offshore. The anglers boated many pompano, bluefish, ladyfish and Spanish mackerel on tipped pink and white jigs. All four anglers hooked up big at the same time. Capt. Bubby orchestrated this unusual multiple hook up. They fought the fish over and under each other, around the boat. Somehow the captain was able to have his patrons boat all four fish. Linda’s arms and wrist ached after the fight. Her drum weighed more than 35 pounds.

Contact us to book: This email address is being protected from spambots. You need JavaScript enabled to view it.
or Call 239-642-4437

P: 239-642-4437
E: This email address is being protected from spambots. You need JavaScript enabled to view it.